Archives For Movement of Rank and File Educators

We are ALL ATRs

DA Report- Why Vote No

I am going to dispense with my usual lengthy summary of what President Mulgrew said because you’ve already seen most of it in the UFT propaganda literature or you will hear it when union representatives come to your schools.

“Up until two months ago at the DA, Mulgrew was telling us that the city has money but they always say they are broke.  I keep reading in the papers that the city surplus is growing.”

(Mulgrew in February)
“We look at the city’s fiscal numbers all the time; it is clear to us that there is money out there. We need our teachers to be paid at least at the level of the school districts around us, which we are not.”)

I continued: “The city is not in bad shape financially so why are we settling for so little.  If we take out the 4% + 4% for the first two years that just equals the last pattern (and we won’t see until between 2015 and 2020), the pattern we set for the rest of municipal labor is 10% total over 7 years.”  That is the worst pattern in municipal labor history (at least as long as I have been around).”  END_OF_DOCUMENT_TOKEN_TO_BE_REPLACED 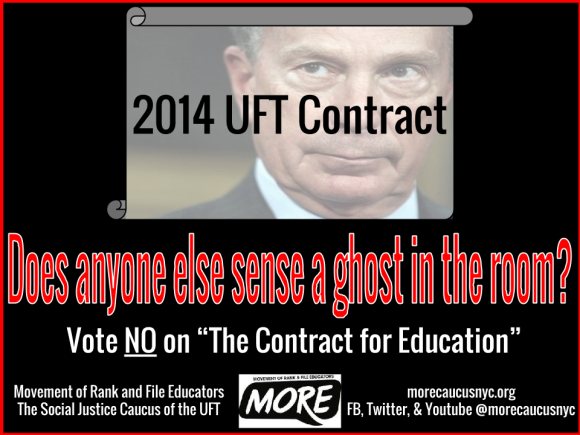 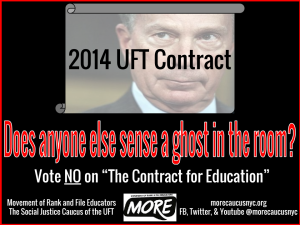 The Contract We Do Not Deserve

The UFT and City of New York finally came to an agreement. In fact, the UFT Facebook celebrated by proclaiming “the wait is over” and it’s “the contract for education”. Unfortunately, this is not the contract we deserve, and it is no reason for a victory lap. Simply put, the retroactive pay is delayed until 2020, the raises are deferred until 2018, and New York City educators are left with 5 years of pay freezes and “raises” that don’t even keep up with the cost of living in New York. We have not received a raise in 5 years and now are being told to celebrate because we finally have one! This is not a fair contract and clearly not the raise and back pay we deserve. Our costs from milk to gas to utilities to our children’s colleges, have skyrocketed and all we can celebrate is a 2% pay increase starting in September.  This is a demeaning insult to our profession.

END_OF_DOCUMENT_TOKEN_TO_BE_REPLACED 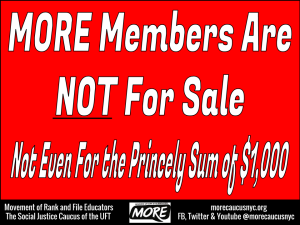 END_OF_DOCUMENT_TOKEN_TO_BE_REPLACED

Watch the video for a sneak peek of the rally and march in front of NYC City Hall to defend public education from destructive, profit-driven corporate “reform”. Endorsed by 30+ parent, teacher, and student groups, including MORE. Featuring some great speakers, including a message from Diane Ravitch!

30+ organizations representing parents, teachers, students and community members taking to the streets in defense of public education
Get more information, then RSVP

The NY United Teachers union is comprised of more than 1,200 local unions across NY State. This year the Movement of Rank-and-file Educators (MORE) ran six candidates for the Board of Directors. NYSUT Elections have been uncontested since 1979. The six candidates pooled their speaking time at the NYSUT Representative Assembly convention and were represented by Lauren Cohen and Mike Schirtzer. Behind them were James Eterno, Julie Cavanaugh, Francesco Portelos, Jia Lee from MORE and our union sister from Port Jefferson Teachers Association Beth Dimino.