MORE (Movement of Rank and File Educators) invites you to a day long retreat on the nuts and bolts of creating a strong social justice union by mobilizing our chapters. Work with MORE on creating a democratic, bottom up organization that reflects our vision for a member driven UFT. Participate in discussions and workshops on building MORE leaders to stand up to the attacks on teachers, students and communities of New York City.

On Thursday, December 20, the mayor’s Panel for Educational Policy (PEP), which acts as a rubber stamp for Bloomberg’s policies, will meet to make decisions about charter school co-locations. The PEP will be deciding on whether to impose co-locations on 17 public schools. Affected districts include: Bronx: District 8, Brooklyn: Districts 13, 14, 17, 18, 21, 23, 32, Manhattan: District 2, Queens: Districts 24 and 75.

MORE urges you to join us as we oppose this attempt to further erode and privatize public education. We stand against the proliferation of charter schools crowding out district schools for teachers, rooms and other resources. MORE stands for equitable funding and more resources to the schools that need them the most.

Charter schools are not truly public. They are often run by corporations as for-profits. Charters choose students by lottery and counsel out students they believe won’t perform. They server far fewer ELLs and children with special needs. Despite this, 80% of charter students perform the same or worse than students in public schools.

MORE believes that access to a high quality public education is a basic human and civil right; it is not something  that should be won in a lottery. Instead of creating winners and losers, as the business model of competition and choice ultimately does, we should focus on the real reforms that will finally achieve the promise of one free, fair, high-quality and integrated public education system.

If you agree, join us to protest these new co-locations!

The High School of Fashion Industries

Much of the 12/12/12 Delegate Assembly was dedicated to teacher evaluations. This isn’t surprising, as the Unity crew knew that MORE caucus was showing up with petitions and a resolution in hand. For the better part of an hour, delegates were told how UFT President Michael Mulgrew is fighting this evaluation battle for us and how Unity is giving its all to protect teachers from the evil machinations of Mayor Bloomberg. You’d never know from all this that it was the UFT leadership, headed by Mulgrew, who agreed to the new teacher evaluations in the first place–without input from the members.

So that, of course, is not what happened.

“That the UFT conduct a broad and democratic discussion about the new evaluation system which would include that: our union immediately poll the membership with regard to the new measures and host forums at chapter, borough and city-wide levels where members can discuss this new system”

“That if a new evaluation system is negotiated with the city outside of a new contract, the UFT hold a membership-wide referendum on whether to accept the system, conducted in the same manner as contract approval votes.”

Kit Wainer, one of MORE’s High School Executive Board candidates, spoke passionately on behalf of teachers. He pointed out that we are constantly having policies imposed on us by the DOE, that we are demoralized, and that we must have a voice in matters that so deeply and personally concern us. Wainer also said nearly one thousand educators signed the petition calling for a rank and file member vote on any new agreement and over a dozen school chapters endorsed it.

It was an elegant plea, but Unity was prepared. They presented UFT Staff Director and Executive Board member Leroy Barr to speak against a democratic vote among the members. He said the Delegate Assembly is a duly elected body that represents the wishes of its members. Barr claimed that the DA holds the authority to make decisions for its members, and that anyone who questions that authority (presumably MORE and its supporters) ought to be questioned themselves.

The vote was 70% to 30% against the MORE resolution. Against a democratic vote. Against the right of teachers to have a say in a matter that fundamentally threatens our professional lives.

Overall, this was a loss for union democracy. Nevertheless, there are some bright spots. In a delegate assembly overwhelmingly dominated by Unity, MORE gathered a significant percentage of the votes on this resolution. Many delegates spoke to MORE members following the meeting. Momentum may be swinging in favor of a more democratic union. Perhaps most significantly, the UFT is feeling the heat and knows it is in a fight for the hearts of its members.

You can help. Let your chapter leader, delegate, and Mulgrew himself know that you demand a say in your professional future. Tell them that you don’t want fundamental changes to our current contract and evaluation system without a referendum. Tell your colleagues and ask them to spread the word.

Facing an arbitrary 12/21/12 deadline imposed by Chancellor Walcott, a growing wave of bloggers have begun speaking out against any teacher evaluation scheme that harms teachers and ignores our voices in coming to an agreement. There is increasing concern that Unity will succumb to pressure and agree to a system without coming to terms on a new contract. MORE’s position is that there needs to be a membership-wide referendum before any such agreement is reached. Read what education experts and your peers have been saying online. If you agree, sign the petition at http://morecaucusnyc.org/sign-the-petition/.

If you agree, sign the petition online and join the growing wave of opposition to an evaluation system that devalues teachers!

Randi Weingarten, American Federation of Teachers President and former United Federation of Teachers President, has been talking up a proposal that would require a national certification exam for teachers, much like the bar requirement for lawyers.  The proposal, which she first raised at the Aspen Institute, has received much attention, especially from the corporate reform crowd, who support it.

“It is shocking that our national union leader is proposing a national high stakes exam for educators, while at the same time leading a national campaign supposedly against the overuse of high stakes testing for students,” said Julie Cavanagh, NYC teacher and UFT presidential candidate with MORE caucus.  “What we know about these kinds of exams is that they sort, deter, and discriminate.  Unfortunately, Weingarten’s proposal reinforces the teacher quality problem myth and the idea that high stakes standardized tests can promote high quality teaching and learning.”

Cavanagh continued, “Instead, we need proposals that offer authentic solutions for attracting and retaining quality, experienced educators.  We know that, apart from class size, the most important in-school factor that positively impacts student achievement is teacher experience.  That experience cannot be predicted or captured in any test score.”

“Standardized exams tend to be racially biased,” said Brian Jones, MORE’s candidate for UFT Secretary. Jones added, “Over the last several years we have seen a sharp decline in the number of Black and Latino/a educators in New York City, Chicago, and across the country.  Our union leadership should be proposing alternatives that assist in the recruitment and support of Black and Latino/a educators, and historically speaking, standardized tests are better instruments of exclusion than inclusion.”

“Exams such as the bar are useless when it comes to ensuring preparation for the work force. Randi of all people should know this since she passed the bar and has described it as meaningless and irrelevant,” said Kit Wainer, Executive Board candidate with MORE caucus.  Wainer furthered noted, “Beyond issues of validity and bias, we know what these types of exams measure:  how much one prepares for the exam.  There is no evidence to show an exam such as the one Randi is proposing will in any way help to better prepare teachers; testing doesn’t produce or impact positive outcomes, they simply make some people a lot of money.”

MORE caucus, The Movement of Rank and File Educators, stands firmly against a national exam for teachers and stands for policies we know will actually help our profession and the children we serve:  smaller class sizes, more rigorous and fully funded lead teacher programs, as well as mentoring and support to develop and retain experienced educators, especially in the first three years of teaching.

December 5, 2012 — 1 Comment
DeWitt Clinton is only one of the many schools slated for “early engagement” potentially leading to closure – we call on all supporters of public education to come out to support our neighborhood public schools and stop Bloomberg’s school closure campaign.  Please send reports from this and other hearings (like the well-attended hearing for Boys and Girls HS in Brooklyn Tuesday) to [email protected] 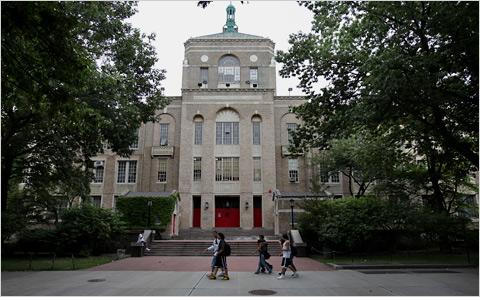 A community forum to help determine the fate of DeWitt Clinton will take place on Thursday December 6, 2012 from 6-8 in the auditorium. The school is located at 100 West Mosholu Parkway South, Bronx, NY 10468.  Here is their chapter leader’s account:
The NYC Dept. of Education has included DeWitt Clinton HS in the Bronx on its recently released list of “failing schools”, which means that it may shut down Clinton – a school that is more than 100 years old – within the next year.  Clinton is one of a few large comprehensive high schools remaining in NYC; the others having been undermined then closed by the DOE.  This policy of closing schools rather than helping them is part of the effort of “reformers” to privatize public education.
There has been a systematic sabotage of large high schools by the Bloomberg administration.  After more than a decade in office there are more and more schools that, based on the Department of Education’s questionable “Progress Reports,” are slated to close.   We believe that schools do not fail, which is what education “reformers” claim; rather, it is policies that fail. END_OF_DOCUMENT_TOKEN_TO_BE_REPLACED