State of the Union Weekly Update #1

Welcome to the first of many weekly updates from State of the Union…
Here is what is going on this week.
1) Friday, March 30, 4:30 PM  - Working Meeting for Committees  - Please come to continue and extend the work we started on March 10. Action, Education, Points of Unity, Structure and Communication committees will each be discussing their continued work – please join us and make it as productive as possible.
Starlight Diner, 9th Ave and 34th Street (1/2/3A/C/E to 34th)

2) Friday, March 30, 4:30 PM - Happy Hour for Potential Chapter Leaders-  Thinking about running for chapter leader or delegate (or know someone who is) but need help with your campaign?  Not sure what building a strong chapter would entail? See our blog for details.
Shades of Green Pub – 125 East 15th Street (4/5/6/N/R/Q to Union Square)
3) Saturday, April 21, 12-3PM - Membership Meeting - Location TBA.  See the following proposed agenda. Proposals on Points of Unity, our name, a skeletal membership structure, as well as discussion documents about elections, will be all distributed by April 7, two weeks before the meeting.

And here are upcoming events to hold in your calendar:

In this year’s annual MetLife Survey of the American Teacher, teacher satisfaction has hit a 20-year low point. Teachers nationally are feeling more demoralized than ever, and New York City is no exception.

Building strong union chapters in our schools is one of the best ways to counter this demoralization. Through an organized, active chapter teachers are empowered to work together with colleagues to fight for positive working conditions for ourselves and learning conditions for our students.

Thinking about running for chapter leader or delegate (or know someone who is) but need help with your campaign?
Not sure what building a strong chapter would entail?

Saturday, March 24th, 2pm -  At the NYCORE Conference, a workshop entitled Building Your Chapter: How Do You Organize at the School Level?

Friday, March 30, 4:30pm – Happy Hour – Discuss the ins and outs of a successful campaign for Chapter Leader and of building a stronger chapter.

Upcoming Actions / Thank you to all State of the Union attendees!

Thank you to all State of the Union attendees! / Upcoming Actions

Thanks to those of you who made it out last Saturday. We had a busy and productive day with over 70 people in attendance from many schools across the city, including parents and community activists, retirees, secretaries, social workers and other UFT members.

Let’s keep up the momentum and build this fight!
Here are some upcoming actions:

Saturday 3/24 All Day  NYCORE Conference,
Check out SOTU-led a workshop entitled
Building Your Chapter: How Do You Organize at the School Level?

TEN QUESTIONS FOR PRESIDENT MULGREW ABOUT THE EVALUATION DEAL

Part 2: NEXT STEPS
MARCH 10: 10am-4pm
Graduate Center for Workers Education (25 Broadway)
TEN QUESTIONS FOR PRESIDENT MULGREW ABOUT THE EVALUATION DEAL
1.     When will the text of the evaluation agreement reached on February 16 be released?
2.     Unlike the February 16 deal, will the final evaluation deal with the city get put to a vote?
3.     Why weren’t the turnaround schools part of the deal? What organizing is happening to protect those schools?
4.     How will we prevent the State evaluations from being published in the New York Times? Why wasn’t a special exception to FOIA for teachers part of the deal?
5.     Given the inordinately high error rate in TDRs, how is the UFT going to prevent similarly inaccurate measures from being used to rate teachers under the new system?
6.     Why are only 13% of observations subject to the appeals process? How will the UFT decide who is part of the 13% who get a fair appeals process?
7.     Who hires the “validators”?  Will they be hired in a way similar to the PIP+ evaluators, which have found against teachers in a vast majority of cases?
8.     Why did the UFT agree to allow teachers rather than the DOE to bear the burden of proof when they have been deemed ineffective under ANY circumstances? Isn’t this like saying that sometimes one can be considered guilty until proven innocent? How is due process possible when this is the case?
9.     Given the deal mandates one unannounced observation a year, what happens to our contractually protected right for a lesson-specific pre-observation conference for teachers in danger of an adverse rating?
10.  If your goal in negotiating the local 20% is performance based assessment rather than standardized testing, how will you get this approved by State Education Department?  Especially since the state can threaten to withhold the 4% increase in budgeting if an agreement isn’t reached.

STATE OF THE UNION

On February 4, over 200 people attended  State of the Union – Part 1, featuring 15 workshops focusing on issues facing the UFT in the age of ed deform.
That was only the beginning.
Join us on March 10 to help plan the next steps in moving our union forward, and unite those who came together on February 4th into a common organization.
As the UFT and NYSUT agree to an evaluation system that requires 40% of evaluations to be based on state or local high stakes tests, mandates unannounced observations, and allows for an independent appeal on only 13% of first time ineffective ratings, it becomes even more urgent to discuss how we can build a movement in our union to fight for an alternative to the concessionary approach.
We are asking for a $5-$10 contribution at the door to pay for expenses incurred for this event.
Childcare available upon email request before Thursday 3/8
For more info, find us on Facebook: State of the Union or email [email protected]
Flyer for distribution at your school attached (reply for a lighter version for less toner use).

Check out a selection of photos from the last Fight Back Friday on January 27th.  The message focused around solidarity with the 33 turnaround schools under attack by Bloomberg, and against high stakes testing. 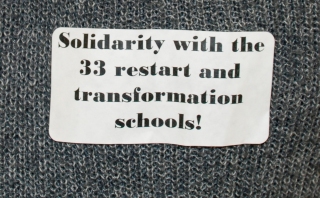 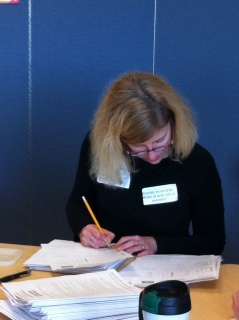